The Elliptical vs. Treadmill Controversy

Alex Hutchinson draws on the latest research to answer your fitness and workout questions in this biweekly column on the science of sport.

Do I get the same workout from the elliptical machine that I get from running?

More than 23 million Americans used elliptical trainers in 2007, according to the Sporting Goods Manufacturers Association - triple the number that used them in 2000. Canadians have also eagerly adopted the low-impact, pseudo-jogging machine. 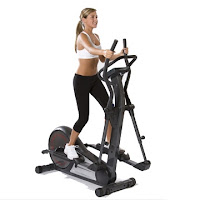 Despite this popularity, there's still some haziness about the benefits of elliptical use - even among researchers. The biomechanics of the low-impact elliptical motion are still poorly understood, though studies now suggest it could help ward off several common running injuries. And there's no consensus about how hard your body has to work compared to other exercises.

A 2005 University of Scranton, Pennsylvania, study found that at a self-chosen "hard" level of exercise, subjects consumed more oxygen and had higher heart rates on the treadmill than the elliptical. In contrast, a University of Idaho study in the same year found that the elliptical felt easier than either the treadmill or recumbent bike, despite producing the same oxygen consumption and heart rate.

Subsequent studies have added little clarity, which suggests that any differences are too small to matter. An Irish study published in the Journal of Sports Medicine and Physical Fitness appears to be the only one to tackle what really matters to most people: fitness and weight loss. A group of 24 women performed a 12-week fitness program using either an elliptical, treadmill or stair-climbing machine. Cardiovascular fitness increased and body fat percentage decreased to the same degree in all three groups.

There are other differences, though. A forthcoming study by Western Washington University exercise scientist Kathleen Knutzen used elliptical machines with force plates on the pedals to determine that, even at a fast stride, the forces on the lower legs were comparable to walking, and two or three times less than running.

More generally, the constrained elliptical stride calls on muscles in a different way than running freely would, much like the differences between lifting free weights and using a weight machine. That means that the elliptical will never be a perfect substitute for running - but it can be ideal for those with injuries such as patellofemoral pain syndrome, often called "runner's knee." The injury is sometime 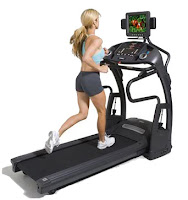 s caused by an imbalance between two parts of the quadriceps muscle, which pulls the kneecap off-centre during each stride

The elliptical also allows you to pump the arm handles to get your upper body involved in the workout. Studies by Constance Mier and her colleagues at Barry University in Florida found that using the arm handles made little difference to oxygen consumption, heart rate or perceived effort. However, the two actions are sufficiently different that alternating between them might allow you to last longer - and thus get a better workout - when using the elliptical, Dr. Mier suggested.

Ultimately, the elliptical is a perfectly good way to get fit. But unless your goal is to master the art of moving your feet in little ellipses, it makes sense to add in other, more functional activities such as walking, running or biking.

"Mix it up," Dr. Knutzen advises. "Don't do the same thing every day."

Alex Hutchinson is a former member of Canada's long-distance running team, and has a PhD in physics.

If you like this post, you might also like these:
Lose 1 lb per week (or more)
How to Increase your Metabolism
Under 50 Calorie Snack Choices
Eating Smart at a BBQ
Posted by Unknown at 10:27 AM