How often should you weigh yourself? 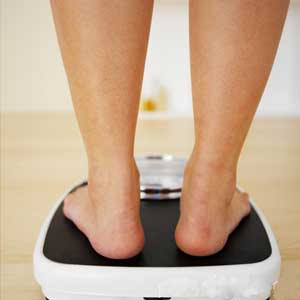 Many popular weight loss plans, such as Weight Watchers, do not recommend weighing yourself daily. Instead, they recommend stepping on the scales once per week or even less frequently.

Our weight fluctuates somewhat from day-to-day, and daily weighing can lead to discouragement and potential diet sabotage if you see a higher number on the scale than you saw the day before. Most diet experts believe that a once-weekly or even monthly weigh-in is a more accurate reflection of weight control progress.

But a group of doctors who studied obese and overweight adults who were trying to lose weight as well as overweight adults who were trying to prevent weight gain found that those who weighed themselves more often lost more weight and prevented more weight gain over two years than those who weighed themselves less frequently. Contrary to the advice given in many popular weight loss regimens, this study suggests that at least some people can benefit from the accountability brought on by daily weigh-ins. Potential advantages of daily weighing include recognition of slow patterns of weight gain that may not be immediately apparent and the chance to modify lifestyle habits before the total weight gain becomes extreme and difficult to control.

The personality of the individual dieter likely plays a role in deciding how often to weigh oneself. If you're easily discouraged, daily weighing might cause you to give up your attempts if you don't see rapid progress. On the other hand, if you crave control and feedback, daily weighing might satisfy more of your needs and fuel your motivation.

Whatever weigh-in frequency you choose, keep these tips in mind when stepping on the scale:

1. Weighing yourself first thing in the morning is usually best. Because of variations in food and fluid consumption, we often "gain" different amounts of weight throughout the day.

2. If you're weighing frequently, remember that daily fluctuations in weight are common. Just because you're heavier today than yesterday doesn't mean your weight control program isn't working. Don't become a slave to the numbers.
3. Monthly variations in weight are also common in menstruating women.

4. "Plateaus" in weight loss aren't necessarily bad. If you're exercising a lot, your weight may remain constant for a time even though you're still decreasing your body fat content and getting healthier.

5. Finally, cues other than the numbers on the scale are equally important. How do you feel? Are your clothes getting looser or tighter? Do you feel stronger, healthier, leaner? Your own perceptions can be the most valuable tools to help you track your weight control progress.

Subscribe in a reader
Posted by Unknown at 6:00 PM